Matiz taxi! Why not?

LG Electronics China has its own Learning Center in Beijing and they grew rapidly for a few years. It was a branch of LGE Learning Center Korea but not any more. They have their own Chinese e-learning site and staffs. Last year they performed much better than Koreans in several aspects. Now I found that they already opened their blog, e-Learning探索日志. It is interesting to keep observing and learning how they are going through their blog. Learning Center China put one step forward.
댓글 1개:

Kick off trip of Web standards forum (tentative) in Korea

During Last weekend days, I joined the first official meeting of web standards forum in Korea. It is a closed group of people who are about to write a textbook about web standards for Korean readers. We agreed that the current status of web developing convention is severly distorted in the standards and accessibility viewpoints. Kwanghyun at Digital Media Research, Hyeonseok, Kukie, and Hooney joined the overnight trip to Hwangdo -- a small island located in the western sea besides the Korean peninsula. I believe I will have to devote myself to the book at least for a couple of months. Thanks to all who shared their valued time on Saturday and Sunday.
댓글 없음:

Book review: A theory of fun for game design

It seemed so exciting to look into the world of game design, and theory of fun at first. It was quite a burden, however, to continue reading it without understanding and capturing the grand pictures of what the author tried to deliver. The author, Raph Koster is one of the most active game designers while the reader, Greg is one of the worst game players. The actual problem did not lie in the ignorance of games but also in lack of extended knowledge to grasp the ideas provided by Raph, the one with vast knowledges ever in the field of game development, cognitive science, social psychology, musical composing, even art. He started his writing with a question, "Why a game has full of fun while the other is just dull?" The introduction of way of how human brain works follows to pave the way for his remaining chapters. He regarded the game as a kind of learning. Therefore it was important to adjust the level of difficulty in a game in order to provide player an adaquate level of learning, problem solving, pattern recognizing, or exploring experiences.

His comparison between games, music, and other performing arts were also insightful, if you have keen interest in human principles of high ordered human behaviours. He closes his book speaking in defense of the importance of game designer against the prejudice of old generations.

I must confess that the book is not a well-organized textbook nor a collection of fact-based theories but it seems to be a combination of various psychological findings and his full-fueled insight. It is not easy to keep the previous things or current topics in your memory to get a little bit better understanding and sense of fun in reading current pages. Sometimes I was confused and lost my ways in his footloose brainteaser. It is a book about fun for game design but is not a comic book easily covered in the crowded subway train.
댓글 없음: 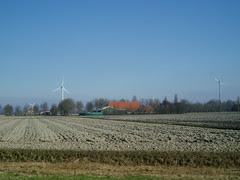 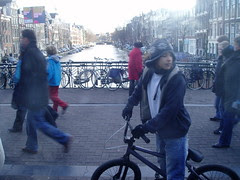 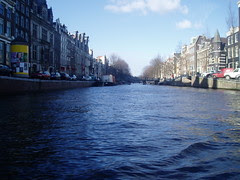 Although the winter is not the prime time, my first visit to Europe was impressive. I was there for 8 days to setup an online training site and transfer necessary skills to the site administrators. Dutch people were kind and fortunately they spoke English so well.

The afternoon of Saturday and Sunday were the available times for me to look around Amsterdam city. It is not reasonable to tell about the city nor about the country with only a few days’ superficial experience. I am, however, trying to deliver some personal impressions about what I’ve looked through.

The hotel room was a little bit chilly at the highest temperature of adjustable knob and this was the first difference between that of the United States. The U.S. hotel rooms were too cool in the summer or too hot in the winter. I thought Americans were indifferent to the energy saving.

I found some unique features in Dutch street. First and most impressive thing was that the roads for bikes were found almost everywhere. Especially around the Dam and the Centrum, trams and bikes were recommended to move instead of private cars according to the tourist information. Also I could see many parking lots for bicylces in the street. One more interesting thing is that the small cars with hatchback seemed more popular than the usual notchback cars. Moreover, it was not so difficult to find a single-seat or double-seat car in the street. Alas! Small is beautiful!

Windmills and tulips are two representative words when I think about the Netherlands. A few traditional windmills remained but they did not seem to be used any more. Instead, very large wind turbines are easily found when driving outside the center of the city. Unforunately, the winter was not a good season to enjoy the beauty of tulips, greens, and sunshine. I missed them so much.

I regret that I was totally ignorant of Dutch during the stay. I was wondering what the messages are in the road signs. I hope I will be able to learn some basic Dutch (eg. how to pronounce, how to say hello) if I had a chance to visit the Netherlands again. The Dutch sounded much like German but it does not have umlaut.

Canals were ubiquitous throughout the city. The typical Dutch house faces a canal with just a small front yard. I could look at the beautifully decorated room through the very large window or just whole surfaced glass. One of my colleagues told me that Dutch people enjoy decorating their homes. Yes, it’s their sweet home!
댓글 없음: